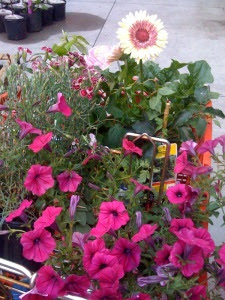 Recently I hit a wall. Don't worry, I don't mean that literally. It was the kind of wall where I realized I had been so busy working, commuting, traveling, and going to my stepson's baseball games that there was little time for anything else.

I hadn't planted a garden as I had intended this spring. Laundry had taken over the bedrooms and bathrooms. My journal hadn't been opened in weeks. Ditto for the book I'm reading. I don't even like to think about the state of the garage and the basement. You'd think we were victims of indoor tornadoes. Like a neglected lawn (oh yeah, there's that too), my life was entering the unmanageable.

Then an interesting thing happened. After another far too short weekend and a full Monday workload, I decided it was time to begin a garden. Right then on that wet Monday night.

I drove to the garden center and spent more than an hour slowly wandering the vegetable plants, herbs, and flowers. In that giant greenhouse, I could feel my spirit settling. I selected some flowers for potting as well as some herbs and veggies, a nice trellis, two giant bags of soil, and a couple of seeds. (It should be said here that I am not a gardener. I know very little about it, in fact. But I think I'd like to.)

By the time I got home it was after 9:00 p.m., certainly dark. I unloaded everything in my garage and spent a few minutes admiring my garden to be.

Tuesday night after my usual long commute home and dinner, I went outside and potted plants. It was after 9:00 once again and I had to walk every few minutes to turn the motion-sensor light back on. But in those shadows, I potted my flowers and arranged them on my deck where I could see them in the morning.

On Thursday I was off and, though I did an hour or two's worth of work, I used that day to tick off to do items: 3 loads of laundry, buying toothpaste, depositing the $25 birthday check my sweet grandmother sent me 6 weeks ago, purging my closet of unworn clothing, emptying the garage of the mountainous pile of old broken down boxes, and guiding my stepson in cleaning out his backpack. I even had time to write not one, but several blog posts.

I spent all day Saturday and the first half of yesterday at my stepson's baseball tournament. Upon returning home yesterday afternoon, rather than flopping on the couch wiped out (like I really wanted to do) I cleaned out my garden bed and planted the vegetables and herbs. It was actually quite therapeutic.

In the span of one week, my life became manageable again. What suffered as a result? Not one thing. Work was still there on Friday and again today. My husband and stepson carried on with their usual routines. Everybody ate dinner, sometimes together, sometimes separate, but no one went hungry.

I, however, am quite a bit more calm. Imagine that.

What can you do this week that will make your life easier or relieve a little stress, even if it seems like an oddball time to do so?
Labels: Self Improvement