August 15, 2011
Did you watch the CMA Festival last night? Ok, maybe not everyone likes country music as much as I do, but I was glued to the program, particularly because this year I was there.


For Christmas last year as I waddled toward my last month of pregnancy, my husband presented me with tickets to the CMA Festival in June. By then, he said, I might want a break from new motherhood to do something "me." What a sweety.

So in June we left the baby and my teenage stepson with my in-laws and flew to Nashville for four days of country concerts.

The few main blocks of downtown Nashville were shut down. Everywhere corner we rounded revealed a new stage, each with a full lineup every day. It was at these stages where we watched Mark Wills, Bo Bice, Wade Hayes, and one of my favorites, Carolyn Dawn Johnson. It is also where we fell in love with a new group called Eden's Edge. One of the stages was at the riverfront where our pass let us use the photo line to get up close to Crystal Bowersox and Terri Clark. 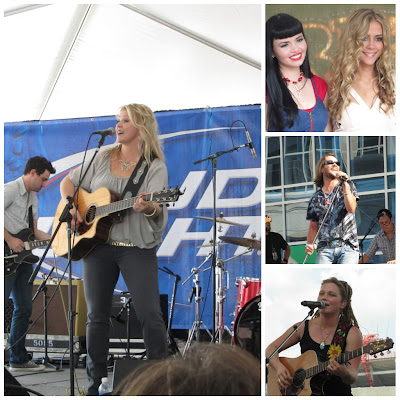 We also did random things like pose in a makeshift cranberry bog.


Each day we wandered from stage to stage and booth to booth seeing what there was to see. We also visited the fan fair hall at the convention center where most of the autograph signings took place. While we didn't bother to stand in line for autographs, we were able to get close for pictures.

It was the fan fair hall where I learned that most of these stars are normal size people like you and me. Except, have you seen how big Trace Adkins looks on TV? Um yeah... he's even bigger in real life. He is hugemongous. Yes, he required a new adjective. I know no words in the English language to describe a man with stacked cheek muscles.


Most of that wasn't on the TV special and that was a big part of the experience. What you saw on TV last night was the main headline acts at the arena. Again this was four nights with about five major acts per night sprinkled with a few unannounced surprises.

Surprises? Oh yes. The Zac Brown Band surprised us by bringing out Alan Jackson. Brad Paisley surprised us by bringing out Alabama, which by the way was the biggest applause of the entire four days. Alabama can still bring the house down. Did you see that Big & Rich performance? We were sitting there between acts waiting for the stage to be reset. I think Trace Adkins was next on the schedule. All of a sudden out come Big & Rich for one song bringing Gretchen Wilson with them, too, then they disappeared just as quickly. Surprise!

Among others we saw Darius Rucker, Blake Shelton, Martina McBride, Reba McEntire, Lady Antebellum, Clint Black, The JaneDear Girls (I've added them to my favorites also and my husband got to shake their hands), Taylor Swift... I could go on, but honestly there was so much it's hard to even remember it all. 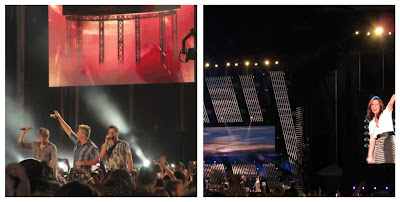 If you like country music, you really should try to get there one year. It is an absolute blast.

The best part for me, though, was spending four uninterrupted days with my husband. There were no work calls, no kids to attend to. Our most pressing issues were deciding where to eat and which stage to go by at which time. We did a lot of hand-holding, a little dancing, and had real conversations.

We returned home relaxed and stress-free. And now, two months later, we got to relive it through the magic of television. Awesome!

Let's recap the important points, shall we?


I think that covers it.  If you missed the special and you're a little sad, go browse www.cmaworld.com for photos and videos.