April 23, 2013
I need to change my ways. Too frequently lately I've allowed myself to get lazy. There have been too many poorly thrown together dinners and too many drive-through lunches. My stomach, my skin, and my overall energy are showing the signs (and they're not good).

I've allowed myself to get caught up in my own quiet world. Sure this can be a good thing sometimes, but it has slipped to the dark side where I ignore my family. Too much time lost in books, computer, iPhone. All of these things are great tools, of course, but when they take my attention away from my toddler or distract me from writing, they are no longer useful tools.

I'm supposed to be helping my pastor lead a small class after church on Sundays yet I rushed through the two lessons for the week during breakfast that morning.

I've planned for a bigger garden this year (with wandering ducks, as you know). I managed to start some seeds indoors this month, though I think I was supposed to do that in March (I'm not sure. I'm no garden expert. Yet.). I don't have the materials for my garden beds. I have a coop that is much too small for the ducks (that story to come another day). No fencing (to keep the ducks in or to keep the wild creatures out). No soil or compost. And Mother's Day weekend is the official time to start planting in my area. (Mother's Day is only two-and-a-half weeks away so start working on those gifts/cards/flowers/whatever you do for your mom.)

I wish I could say there was some good excuse for all this, but there's not. I've taken too much time dreaming and not enough time doing.

This morning started off much the same until I had a "this is ridiculous" moment. I checked my email (in order to procrastinate on other tasks, of course) and saw a message arrived an hour earlier about a "hot" copyediting job due Thursday. As in two days from now Thursday. Was I interested?

Without hesitating I responded yes. Given everything I just explained was falling by the wayside, why would I say yes? Have you ever heard the expression "if you want something done, give it to a busy person?" I think that's true of me sometimes.

Since accepting that offer four hours ago, I've played push the scooter with my toddler (where we push his scooter back and forth to each other), formatted tomorrow's wonderstruck interview, gone to the big box warehouse store to stock up on some food items (something I've been meaning to do for, oh, a month or two), stocked the pantry, washed the dishes, folded the laundry, made some notes for a possible writing project, and written this blog post.

Compare that to the first four hours of my day where I... um... had breakfast... fed the cat... dressed the toddler... well, there were probably a couple other things, but not many.

Fortunately I realize that just because a day started off one way, doesn't mean it has to end that way (flashback to my old post Restart. Repeat as Necessary.). I'm turning it around.

And because accountability is helpful, here are the things I want to do this week (in no particular order):

That's it. I have the rest of today and four more days to do this. Totally doable. I'll let you know how it goes.

Do you have any goals for the week? Put them in the comments and I'll cheer you on. 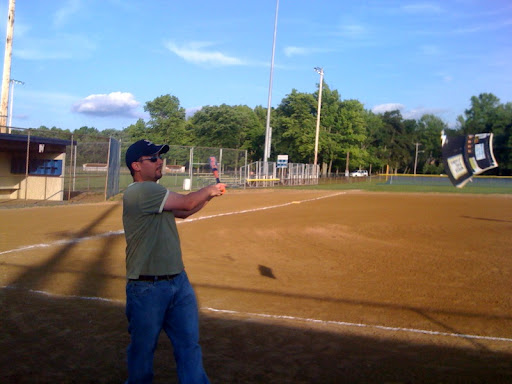 Because this was too good to hold until next week... Wreck This Journal baseball style. That's my husband at bat. Talk about cracking the spine! It's mangled good now. And then I rubbed it in the infield dirt. Overcame the fear of getting it dirty. Woohoo!

Read Wreck This Journal: Week 3 (the first part- where the I mailed the journal)
Read more